Titled “ColaJazz Presents,” the series will air Sundays at 8 p.m. on all eight SC Public Radio stations, with the first episode slated to debut on April 4 – a fitting premiere date as April is recognized as National Jazz Appreciation Month. The first episode will spotlight the Columbia-based ensemble Les Flat Out Strangers. 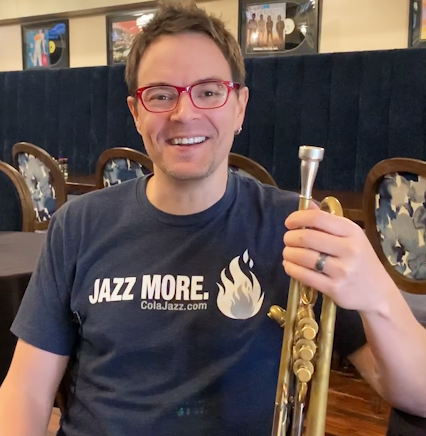 Host Mark Rapp (right), executive director of The ColaJazz Foundation, will feature performances from a diverse group of South Carolina’s top jazz musicians, as well as interviews with those musicians offering an intimate glimpse into their lives, communities and passion for music. Consisting of 13 episodes, with the last one slated for broadcast on June 27, the series will utilize The ColaJazz Foundation’s ever-growing library of concerts, many of which were recorded over the last year in socially distanced recording sessions where COVID-19 safety precautions were followed.

Ed. note: Rapp is no relation to the author of this article.

“South Carolina is home to a growing jazz community consisting of some incredibly talented musicians and charming venues that provide a home to their performances. We couldn’t be more excited to partner with The ColaJazz Foundation to launch this new series and shine a spotlight on this burgeoning community,” said SCETV President and CEO Anthony Padgett.

This project is the result of SC Public Radio’s ongoing strategy to ramp up local programming.

Now in its 48th year of broadcasting, the SC Public Radio network covers not only most of the Palmetto State, but also communities that border South Carolina, including Charlotte, Augusta and Savannah. This broad coverage area allows the network to reach an average weekly listenership of approximately 300,000 individuals.

“It is with great honor and excitement for The ColaJazz Foundation to partner with and to be supported by SC Public Radio. The weekly Sunday night ‘ColaJazz Presents’ radio show expands our ongoing mission in style, and we can’t wait to share the incredible jazz music being made in South Carolina by South Carolina jazz artists,” Rapp said.

Established in 2014, The ColaJazz Foundation is a community-minded 501(c)(3) not-for-profit organization focused on growing, supporting and promoting jazz in the Midlands through events, education, recordings, resources and advocacy. The ColaJazz Foundation is a recipient of the 2021 South Carolina Governor’s Awards for the Arts, the state’s highest award for achievements in practicing or supporting the arts.